Weather, culture, geography, traditions. Getting information about your destination is essential in travel planning.

Cuba is a marvelous heterogeneous mix of cultures, landscapes, rhythms and traditions. If seen from the air, the island looks like a cayman resting at the Gulf of Mexico entrance, right in the middle between North and South Americas. But there is little of resting in Cuba: its people are charming and transmit tropical rhythms while they speak, walk or work. People say Cubans laugh even about their own misfortunes.

Likewise, exploring inner Cuba, through its ecological paths and mountains -besides remarkably safe- it's a free passport to interactive contact with a wide array of carefully preserved flora and fauna species. No dangerous or poisonous animals or plants have been ever documented in Cuba, except for crocodiles which, because of its gradual extinction, have been excluded to isolated and inaccessible areas, for example, Ciénaga de Zapata, southward Matanzas.

Colonized by Spain since the 15th Century, subordinate of the United States in the first half of the 20th and committed to a sui-generis Socialist Revolution since January 1959, Cuba owns a peculiar authenticity in its culture. Vivid witness of that mixture is Cuban architecture: multiple styles coexist harmoniously on the streets of the main cities, especially in the nine spots declared by Unesco as World Heritage Sites.

Travelers to Cuba will hardly resist buying one of its emblematic products. World renowned Rum and Habanos seduce visitors to this island, where security is not a problem either. One of the lowest criminality levels in Latin America and a health-care system that covers every city and town, are a guarantee of safety and tranquility anywhere here.

Cubans are hosts by nature; they share what they have, no matter how little, and feel like they can get you infected by their life's philosophy. It is hard to feel foreigner or to remain aloof from Cuban's joie de vivre and not a few will find themselves planning next holiday vacations to this island of shinning Sun and idyllic beaches, where people are fascinating and every remote spot oozes culture.

Cuba is an archipelago formed by about 4195 cays, islets, small islands, and a main island, the biggest of the Caribbean and Antilles area. It is privileged by its location at the entrance to the Gulf of Mexico and its shape resembles a cayman.

Its topography shows three big mountain systems: at the West, the Sierra de los Órganos; at the Center, the Sierra del Escambray; and at the East, the Sierra Maestra, home of Pico Real del Turquino(1974 meters over the sea level). Cuba's wider river is the 250 km-long Río Cauto, and the most fast-flowing is the Río Toa.

Length: Large and stretch, Cuba measures 1250 km from Cabo de San Antonio to Punta de Maisí, and it is not bigger than 200 km at its wider part, totalizing about 110 860 square kilometers.

In accordance with its geographical position, Cuba has tropical climate with humid maritime influence. Average annual temperature is 25,4°C, higher at the Eastern region, perfect on winter season.

Life Expectancy: 80 years for women and 76 years for men.

The Asamblea del Poder Popular (Popular Power Assembly or Parliament) is the supreme State organ, represented by the Consejo de Estado (State Council) between sessions period; with provincial, municipal and district's authorities. The Consejo de Ministros (Council of Ministers) is the maximum executive and administrative organ and it constitutes the government of the Republic of Cuba.

Cuba has 15 provinces and a Special Municipality. Main cities, according to their economic development and population are: La Habana, Santiago de Cuba, Santa Clara, Holguín and Camagüey. 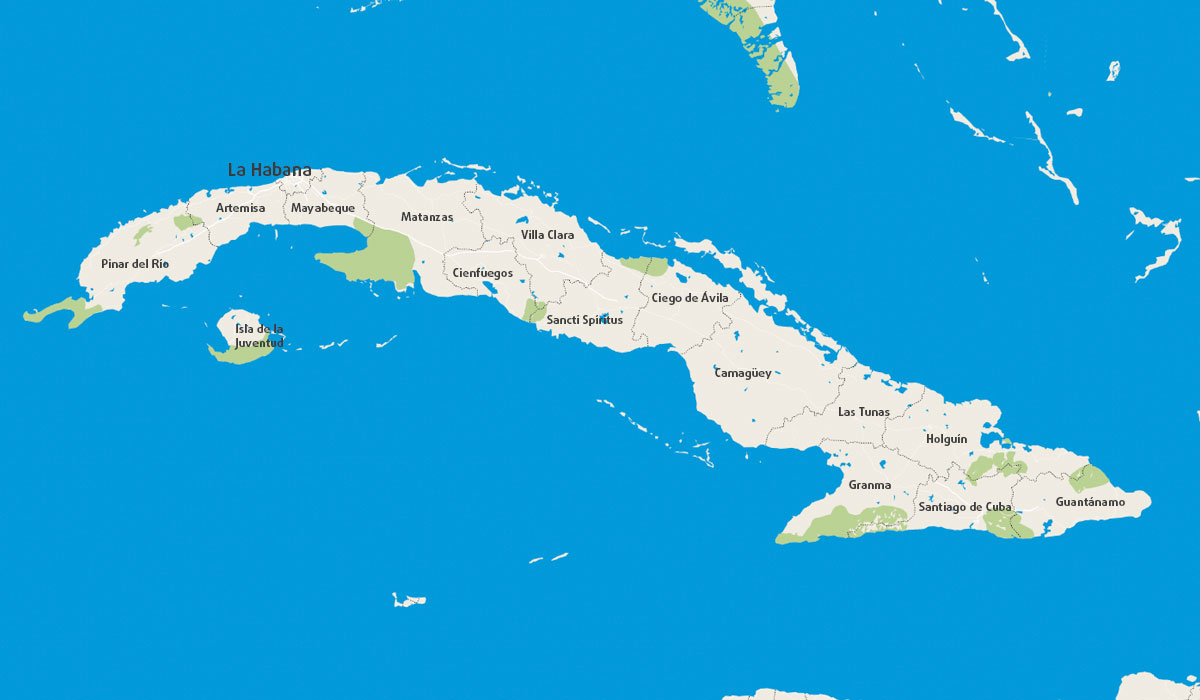 Cuban economy is mainly based on the tourist industry although it also has other important export lines: tobacco, rum, sugar, nickel, coffee and more recently the pharmaceutical industry.

Use of Cookies:
We use essential, analytical and marketing cookies to improve your experience with CubaTravelsClub.com. If you continue browsing, we will assume that you are allowing its use.
Read the Privacy Policies.